In a cultural and tourist city like Brașov, a heterogenous and multicultural society is what makes it stand out from the rest.

This belief is what supports the idea of ​​Ziua Multiculturalității în Brașov (Multiculturality Day in Brașov), an annual celebration an annual celebration by Migrant Integration Center Brașov co funded by Active Citizens Fund Romania, a program financed by Iceland, Liechtenstein and Norway through EEA Grants , Brașov Municipality through the Cultural Programs department and Erasmus+ Program of the European Union, Empathy Project.

Every year, the festivity aims to promote intercultural dialogue and encourage tolerance and respect for diversity, while combatting stereotypes among the local and migrant/immigrant communities.

Two activities – expositional stands for each participating country and a multicultural show – brought the best of over 100 representations of 21 countries and four continents at its 2022 edition on October 9 at the Council Square. 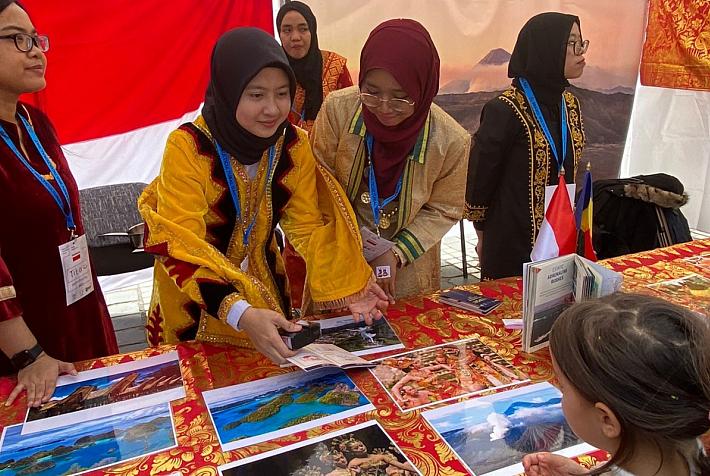 Indonesia was one of the participating countries and performers, presenting the traditional dance of Bahalai from Central Kalimantan, performed by Reana Deva, an Indonesian student at Babes-Bolyai University, Cluj-Napoca. Both the show and the expo booth were prepared mostly by students during their short breaks from their respective universities.

Ilham Catur, the president of the Association of Indonesian Students in Romania (PPI Romania), arrived in the country last year to pursue his economics and international relations master’s degree at the Ovidius University of Constanta. Alongside his right-hand man, Fadel Muhammad Zikrillah from the Transilvania University of Brașov, they gathered at least 12 other Indonesian students from other Romanian cities to help prepare the exhibition.

“I gathered them by offering free accommodation, since they’ve come all the way from other cities, from our organization’s budget,” Ilham explains. When asked if the Indonesian Embassy in Bucharest and Brașov City Hall provided them with material support, he says: “We have all the stuff – traditional costumes, sculptures, flags, lunch, and a RON 200 financial aid.” 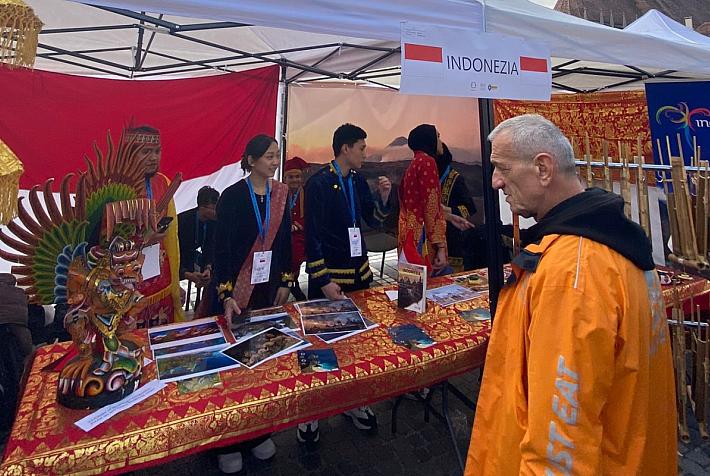 In his turn, Fadel arrived in Romania over two years ago as part of the scholarship program offered by the Romanian Ministry of Foreign Affairs. He represented his Minangkabau, West Sumatra roots during the event, sporting a bright, red costume with gold patterns and a long traditional cap.

“The preparation itself took about two months; due to the location of students in different cities and the busyness of each member, all coordination was done online, until the D-1 event,” he says.

Using Balinese red-gold batik – a carefully-decorated textile using a resist dyeing traditional technique – as a table cloth, along with a miniature statue of Garuda, Indonesia’s state insignia, and several unique accessories of 1,300-something recognized ethnic groups in the country , the booth attracted numerous visitors. Fadel, then, would play angklung, a traditional instrument made from bamboo tubes, to attract attention and later teach those who were curious. 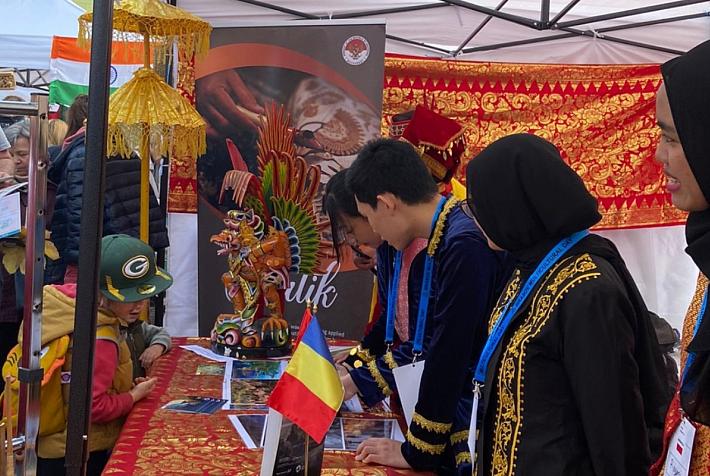 “Romanians were very enthusiastic to visit our booth, especially the children wanted to try the angklung game. Some of them have already visited Indonesia and shared their experiences with all of us,” he further recalls.

While it might be their debut in this event, Fadel hopes to return for future editions and wishes for as many members as possible from the Indonesian society in Romania to participate, not just the students.

“For future editions, I hope there will be as many Indonesians abroad as possible, especially expats, that come to participate and promote our culture. It’s a shame that we can only showcase one talent show because of the limited time for preparation, even though we have a lot of traditional dances and performances that we can be proud of,” he adds.

Behind the scenes of the parallel state Ludovic Orban: Cîțu...

CAF unit delivers 25 trolleybuses to the Romanian city of Brasov...