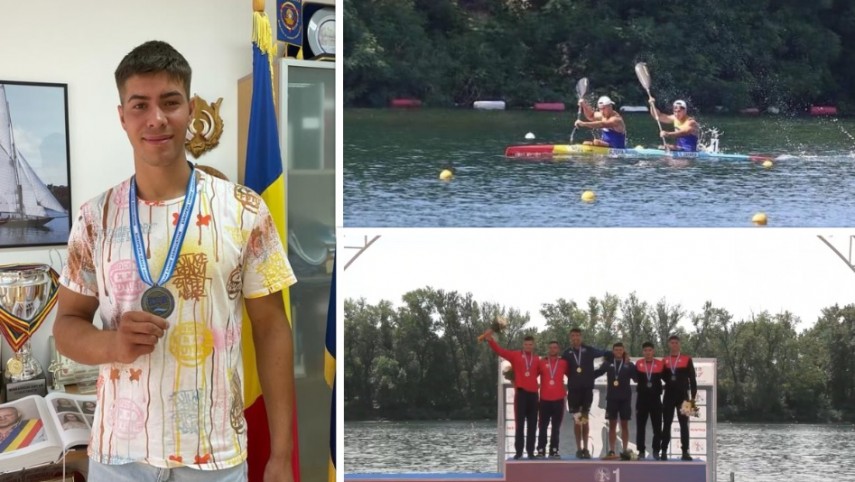 A special new performance for the athlete George Mihăiță Țența (CS Agigea; coaches, Ionel and Cosmin Rață), who also climbed the podium at the European Kayak-Canoe Championship in Belgrade, a competition reserved for the junior age and youth categories.

The tricolor crew formed by George Țența and Darius Zaharia (CS Dinamo Bucharest) competed very well in the youth, in the kayak test 2 on the distance of 1,000 m, winning the bronze medal. The two finished the race in 3: 17.162, being overtaken on the podium by the crews from Italy (Giovanni Penato / Luca Meneguolo) – 3: 14.288 (champions) and from Bulgaria (Radoslav Stefanov / Veselin Valchov) – 3: 16.588 (runners-up).

Multiple national champion of Romania, George Țența is from Constanța County, he started the sport at the kayak-canoe section of LPS “Nicolae Rotaru”, and later he had double identification, LPS – CS Agigea. From this year, after finishing his junior year, he is legitimated only at CS Agigea. At the end of 2021, George was among the athletes who were awarded at the Constanta Sports and Youth Gala with the trophy “Performance for Constanța, performance for Romania”, thanks to his international performances. Among other things, in 2021, the athlete ranked fourth at the World Junior Championship, in kayaking 2 X 500m.

Canoeing
CS Farul Constanța, on the podium and at the National Spring Championship (PHOTO GALLERY)

Andrei Pie, from kayak-canoe, pulls hard on the water
“I want to reach the European and World Championships” (photo gallery)