“The first gas from the Black Sea will be extracted by the company Black Sea Oil and Gas in the middle of this year and then we will have an extra billion cubic meters per year provided by this investment. (…) In the perimeter of Caragele there is and it was discussed that the first gases will be extracted in 2024 and in the perimeter of Neptune Deep, before the end of 2026-2027 we can not hope that we will have gas from the Black Sea. we recognize that Romania is a lucky country, having this very important resource at the moment. ” (digi24.ro)

Germany’s dependence on energy imports from Russia has increased substantially over the last decade. Since 2012, the percentage of gas supplies in Russia has increased from 40% to 55%, an increase of more than a third. As for oil imports, things are pretty much the same: in the same amount of time, oil imported from Russia has come to cover 42% of Germany’s needs; in 2012 it covered 38%. Only 5% of gas demand is supplied in Germany from domestic production.

Germany’s mistake is that by promoting the philosophy of cultivating mutual economic and trade dependence as the right path to peace between Europe and Russia, on the one hand, and increasing renewable energy production, on the other, it has become almost complete. dependent on oil deliveries from the Russian Federation, although it could have found other solutions very early and easily. 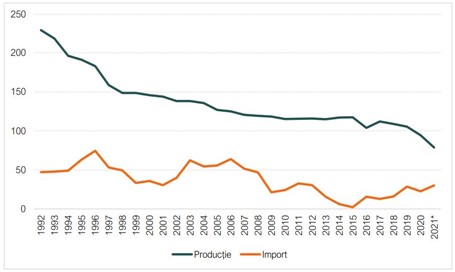 Can we get to Germany’s situation? As things stand at the moment, it is not wrong to say yes. Looking at the graph published by the “Energy Policy Group” (EPG), based on the data provided by INS, we notice that Romania’s domestic natural gas production decreased continuously after 1990, and after 2018 we entered the production territory below 100 TWh, ie about 40% of 1992 production.

After 2017, natural gas imports from the Russian Federation began to increase to 30 TWh, reaching in 2021 a quarter of what Romania consumes; in other words, we have already begun to follow in Germany’s footsteps. However, our rulers have promoted two decisions that raise big questions about the future, namely:

(a) In 2018, Law No. 256 was approved in Parliament and enacted by which operators preparing to take (commercial) decisions to switch to natural gas exploitation in the Black Sea were discouraged from doing so;

(b) Many projects have been approved to make the transition from electricity generation to lignite and coal-fired power plants to clean energy through natural gas-fired thermal power plants. In addition, the rulers decided (and included in the PNRR) that it is necessary to expand the natural gas supply networks of Romanian localities.

The purpose of this analysis is to understand what the rulers meant when they promoted the above decisions, which turn Romania into an import-dependent state, if it does not succeed, by the horizon of 2026 – 2027, to -and increase gas production to 150 TWh (14.2 – 14.3 billion cubic meters). The mere adoption of amendments to Law 256 of 2018 (the offshore law) does not guarantee that the scenario of increasing dependence on gas imports will be avoided.

The bill to amend the offshore law in 2018 has passed the Senate and the Chamber of Deputies, the latter being the decision-making chamber of the Parliament, and is to reach the table of the President, for promulgation.

In the first decade of May, the “Intelligent Energy” Association organized a debate with investors interested in the development of oil operations in the extended Romanian economic area of ​​the Black Sea, with the theme of the draft law which intends to amend law no.256.

“Radio Romania”, which sent a correspondence from the debates, surprised that some operators expected the total elimination of the surcharge of revenues from the sale of extracted natural gas. In the new formula, the surcharge gradually intervenes from a level of the sale price of 85 lei / MWh.

The second issue discussed was that operators will only be able to deduct their investments up to 40% of the additional income tax, although they expected an unlimited deduction, as the Fiscal Code provides as a general rule.

Finally, Article 20 of the draft is considered by investors to be vaguely worded; is the article that refers to the possibility that, in crisis situations, the state should intervene in the market and direct the volumes of gas extracted only to Romanian consumers.

Taxation in the offshore law did not exist at the time when the companies signed the oil agreements under which they started the investments, it was additionally created by the provisions of the Fiscal Code by the law of 2018.

Neither before 2018 nor now, the investors explained, the state did not present impact studies and analyzes to justify the figures on the basis of which the (over-) taxation formulas were built, so that on their basis it is possible to negotiate grounded.

While Romania continues to analyze opportunities, there are countries with a much better fiscal regime, which could be targeted for investments in the exploitation of Black Sea gas, such as Turkey, which has discovered gas reserves in its perimeters in the Black Sea. Black; or Turkey has relaxed the tax regime and will start production in 2023.

Dumitru Chisăliță, from “Energia Inteligenta”, analyzed the provisions of the text of the bill I referred to, before the association organized the debate in question, and posted his conclusions on the association’s website, some of which stand out. :

(a) “… I was surprised to find that the natural gas price overtaxation shows the same graph as in the offshore law made in 2018. Today the price of natural gas traded on RCE was 542 lei / MWh, and the average gas price of domestic production is about 254 lei / MWh.The forecasts show that every decade the prices will at least double.And then why put in a law gas prices from 85 – 145 lei / MWh, prices that probably do not will they ever exist again in Romania? “;

(c) “The third surprise was that

HOW DO WE STAY, WHERE DO WE START?

In 2021, OMV Petrom’s natural gas production decreased by 11.4%, being influenced by the sharp natural decline of the main natural gas fields (Totea Deep and Lebăda Est), of the 4461 Totea Sud well, as well as by the maintenance works. . In Q1 of 2022, as seen above, the gas production of OMV Petrom continued to decline, the decrease being 12.3% compared to Q1 of 2021. (profit.ro)

A review of the production capacity designed or in operation for thermal power plants based on natural gas supply would be as follows:

(b) Romgaz has under construction – even if there are problems with the Spanish company building the target, it is still 80% completed – a 430 MW combined cycle power plant, which will probably be put into operation by 2024;

(c) CIECH Soda Romania plans to build a 230 MW combined cycle power plant in Govora (horizon 2025 – 20260) and Rompetrol is building an 80 MW gas-fired power plant on the Midia platform (possibly to be function in 2023);

(d) Romgaz and Grup Servicii Petroliere plan to build a 150 MW cogeneration plant in Drobeta Turnu-Severin (which is expected to be put into operation by 2026);

(e) A group of South Korean companies (AKEDA, Hyundai Power Systems and BKB) are interested in acquiring the assets of the Mintia thermal power plant (currently shut down) to build a 1,000 MW combined cycle power plant on the platform ( if the project materializes, the commissioning will take place in the horizon of 2027-2028).

If they cannot find gas from domestic production, they will have to secure all these new capacities from import.

Also, let us not forget that in the current context, the primary strategic interest of Romania is to increase the integration with the economy of the Republic of Moldova (both during the Russia-Ukraine conflict, but also later, during the European integration); context in which the energy interconnection between the two banks of the Prut adds Moldovan consumers to the list, in order to cancel their dependence on the Russian Federation (via Transnistria).

Romania’s natural gas production, onshore and offshore, is declining: this is the only certainty we have at the moment. All the other statements, generally optimistic, regarding the projects through which the natural gas production is going to increase starting with the year 2022, refer in fact to desideratums rather than to circumstances on which we can rely in the winter 2022 – 2023.

“Romania will have gas from other sources next winter, including the Black Sea. The exploitation of Black Sea gas has already begun by Black Sea Oil & Gas. Tests are already underway to introduce the first gas molecule into “This year we will have an extra billion cubic meters of gas,” said Energy Minister Virgil Popescu in March, two days before the invasion of Ukraine. Read more on Contributors.ro

Ana-Maria Pâslaru handed over the baton to the management of Unilever... Vasile Dîncu, About Supplementing NATO Troops in Romania: This Contradicts by... 4 Ukrainian helicopters, in the Romanian airspace to Brasov

VIDEO Putin, after 3 hours of talks with the German chancellor:...