Catholic Easter 2022 is celebrated on Sunday, April 17, one week before Orthodox Easter. The date on which Easter is celebrated differs from year to year.

The rule for calculating the exact day was established at the Ecumenical Council of Nicaea in 325 AD.

According to the rule, Orthodox Easter is celebrated every year on the Sunday immediately following the full moon after the spring equinox.

The calculation of the date on which Christians celebrate Easter takes into account two natural phenomena, one with a fixed date – the spring equinox, and another with a changing date – the full moon. The latter makes the date of Easter different every year.

When Catholic Easter falls in the following years:

On Holy Saturday, the Church meditates in silence and prayer on the suffering and death of Christ.

On the night of the Resurrection, the solemn celebration of the Easter Vigil takes place, which expresses the transition from death and sin to new life in the Risen Jesus Christ.

On Easter Sunday, Pope Francis celebrates his first Resurrection Mass every year in St. Peter’s Square in the Vatican, in front of thousands of believers.

The Sovereign Pontiff speaks in dozens of languages ​​the traditional message of Easter and the blessing “urbi et orbi”.

See: When Easter falls in 2022. Holidays and mini-holidays of the year. What days of the week are the holidays?

The most important moments of the resurrection night are:

There are also many unrelated traditions and customs.

In many places, children go on an “egg hunt” to find hidden eggs in homes or gardens.

See: EASTER WISHES 2022 Messages and CONGRATULATIONS for the Resurrection of the Lord. Send a good thought to your loved ones for the holidays

Easter water is special and many traditions are linked to it, in Transylvania being known the custom of walking “sprinkling” or “watering”.

Spraying unmarried girls is a custom that is practiced in many of the villages in Transylvania.

Sprinkling is usually practiced by people of Germanic origin. This custom also occurs in memory of the goddess of fertility and spring, Ostera. Hence the German name for Easter, “Ostern.”

Among other Easter customs among Catholics are the giving and clashing of eggs, traditions similar to those of the Orthodox.

In Italy, on the second day of Easter, there is an egg contest. In Germany, Easter houses are decorated with budding branches, flowers and willow trees, and the trees are decorated with eggs. Children compete in rolling colored eggs in the garden or clashing with them, like the Orthodox.

“The Way of the Cross to the Resurrection, burdened by the fear of war”: the editorial of His Eminence Aurel Percă in “Christian News”

“And this year we started Lent under the sign of the pandemic, which continues to sow fear, even though the state of alert has ceased and a series of sanitary measures that have been in force until now have been eliminated.

For two years, the Covid-19 pandemic was a very hard whip for each of us, and we viewed it as an invisible enemy against which all the forces of science and medicine mobilized to defeat it, sometimes accompanied by sanitary measures. too hard to prevent contamination.

Instead, another enemy has emerged: the war in Ukraine, which sows terror not only among the people of this country, but throughout Europe. Fear is read on the faces of our elders who have experienced war, and there is fear on the faces of those who receive the reverberation of war through the media.

Every day we stop at a real ordeal of children, women, the elderly, who have to flee, leaving behind the roar of weapons and missiles, the infernal noise of tanks, bomb explosions, the alarm sirens that always sound in this country. devastated.

Addressing participants in the Catholic Social Days (Bratislava, March 17-20), Pope Francis wrote that “the blood and tears of children, the suffering of women and men who defend their land or flee from bombs shake our conscience.”

Because “once again humanity is threatened by a perverse abuse of power and partisan interests, which condemns defenseless people to suffer all forms of brutal violence.” 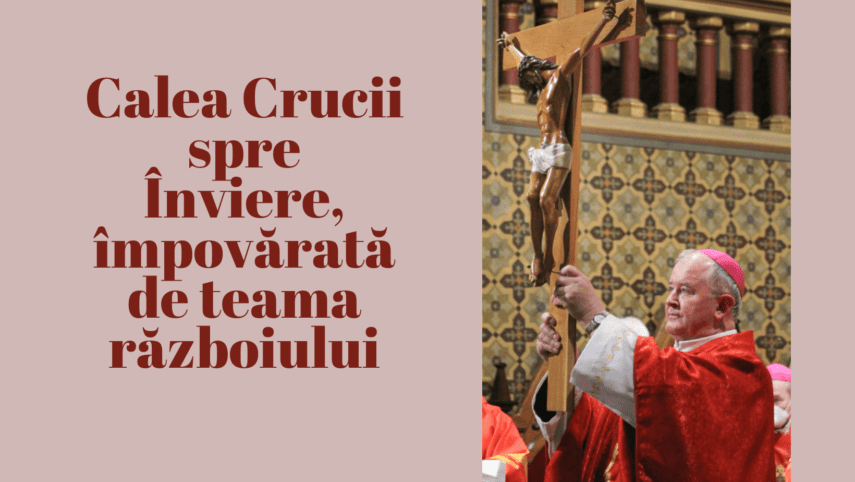 During this turbulent period, the voice of Pope Francis was repeatedly heard, who, in a special gesture, went to the Embassy of the Russian Federation near the Holy See to demand an end to the spiral of war.

“We implore from God the peace that people cannot achieve and build on their own,” Pope Francis wrote in his homily on Holy Wednesday Mass, a day he wanted to be a day of fasting and prayer for Ukraine.

In the words of the Pope at the general audience on February 23, we all felt anxious and anxious: “I have great sorrow in my heart for the worsening situation in Ukraine.”

All these days I have heard the Holy Father repeat with great determination: “Peace be a reality in Ukraine! May peace come true in our hearts and yours! Nothing is lost in peace! Everything can be lost with war! Shut up! ”

The scenario we see these days in the media on the borders of Eastern Europe seems to be an image of so many “crucified and crucified”. Yes, crucified. Children died under the bombs.

Crucified are the mothers who run away and leave a house, a family, a husband who goes to war. Crucified are the soldiers, the Ukrainians defending their homeland, but also the Russian soldiers sent to fight, maybe unconscious, but still worthy of being loved anyway.

We have seen and are seeing many crucified in this war, so that we will not be pushed with all our might to seek the path of peace.

Against this gray background, but very dramatic for the neighboring country, we are preparing to celebrate the Lord’s Resurrection. What will Easter be like for those who have taken the path of exile, whose homes have been bombed, the churches shaken by the blast of bombs?

Easter reminds us of the victory of Life over Death, of Light over Darkness, of Good over Evil, of Hands clasped over weapons.

Darkness and light are, for Christians, the act of beginning the rites of the Easter Vigil. 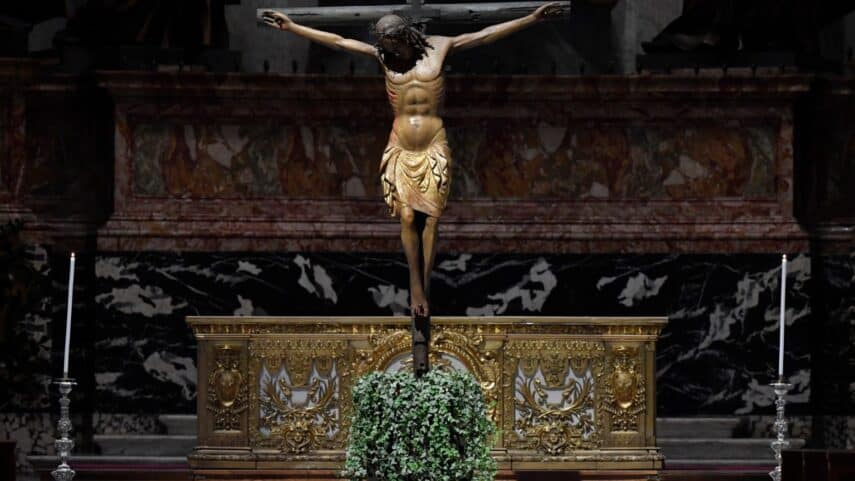 Traditionally, in the church completely immersed in darkness, the celebrant enters with a lighted candle, a timid flame that breaks the darkness, raises it three times, “The light of Christ!”, To symbolize the struggle between death and life, to commemorates the heart of the Christian faith: the man named Jesus of Nazareth, crucified on a cross, was buried and his tomb closed and guarded.

His story should have ended like this, but the stone is rolled and the tomb is empty, the women who saw him repeat the announcement: The Lord is risen, do not look for the one who is alive among the dead!

“Death and life have come together in a wonderful way: The Lord of life has died, but now He is alive and reigns. We know this: Christ the Lord has truly risen from the dead. You, victorious king of death, have mercy on us all! Hallelujah! ” (from the Easter Sequence).

Let us leave Him, the risen Christ, the conqueror of death and sin, to transform our existence, and let us all receive the gift of peace that He wanted to give to the disciples after the Resurrection: “In the evening of the same day, the first of the week, Although the doors of the place where the disciples were, for fear of the Jews, were locked, Jesus came and stood among them and said to them, “Peace be with you” (Jn 20:19).

If all those responsible for the destiny of the peoples receive this message, there will surely be peace in all its dimensions. The resurrection is a historical event that has forever changed the history of mankind. And it must change the fate of this absurd war!

Dear readers of the Christian News magazine, with thoughts and desires for peace, I wish you a happy and peaceful Easter, open to receive from the Risen Lord the first of his gifts, the same one he offered to his Apostles: “Peace to you!”

Keep up to date with the latest news. Follow Alba24 on Google News as well

If you liked the article and want to know what we are writing about:

YOUR NEWS – If you are witnessing special events, take photos, film and send them to Alba24 via Facebook, WhatsApp, or through the online form.

White House: USA and Romania will announce the construction of a...

UK. Romanian young people leave universities as a result of...