This year, Romanian Christmas is on the map of Europe. The first Christmas fair to reach a European ranking is the one in Craiova, and the one in Bucharest on the list of holiday events with entrance fee. After a year of hiatus, the big cities in the country have now tried to bring a drop of joy to the winter holidays.

Tall fir trees, Christmas lights, mulled wine and selected dishes. It’s the perfect recipe for the holiday atmosphere. And this year’s star is the Christmas fair in Craiova.

For the first time, the fair in Craiova, in which the mayor’s office invested 275,000 lei, was taken over in the ranking of the most beautiful Christmas markets in Europe.

It is a very nice atmosphere and the lights and decorations, all very nice.

Kids: I love how everything is arranged and the lights, the decorations.
Reporter: Is it the most beautiful Christmas fair?
Kids: For me, yes.

Cristina Oprea, reporter Observer: The market is surrounded by the smell of cinnamon and gingerbread. In the magical world of the Christmas fair in Craiova, a million lights were lit this year.

Lights that were bought last year. The same goes for Timisoara. But in Suceava the authorities have invested almost 300 thousand lei for lights, and in Cluj more than one million lei. However, the champions of the investments in light decorations are the district town halls in the Capital, with over four million lei.

The fair in Bucharest, known for its entrance fee

The Christmas fair in Bucharest, which was supposed to be the star of the holidays, came to be known rather for the fact that the mayor’s office imposed an entrance fee. 5 lei online ticket and 7 lei directly at the entrance.

Andreea Milea, Observatory reporter: In the first 10 days after the opening, over 90,000 people from Bucharest arrived here at the Christmas fair. And if we refer to the cheapest entrance ticket, then the mayor’s office has so far collected over 400,000 lei.

Tourist: I came on vacation. This is the first time we come to Romania. It’s a Christmas atmosphere. I like!

In Cluj, however, the mayor’s office did not invest any money in the Christmas fair because it is organized by a private company. Admission is free.

Locals: I’m glad it’s being held. Beautiful, colorful, cheerful, crowded.
Very well. Nice. We like.
We like that it was compared to last year when it was nothing. It’s very nice.

In Timişoara, the fair is in fact a park spread over ten hectares. For 200 thousand euros, the County Council transformed the Village Museum into a huge Christmas park. The town hall was not left behind. He made a bargain. Only the Christmas tree cost 15,000 euros.

Suceava was also decorated for the holidays.

Locals: It’s very nice … Christmas atmosphere.
We rejoice, we feel better and we forget about covid.
I like the atmosphere here the most, it’s very beautiful.

At all fairs, Santa’s houses are open for children who have collected wishes during the year. 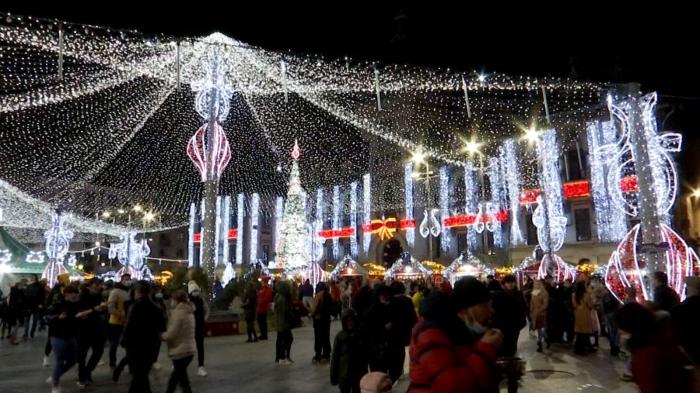 The President of Turkey reproaches the European Union The pension bomb has exploded! All retirees in Romania need...