The inflation rate reached almost 8% in October, another negative surprise. Romania came to have the deepest real rate in negative territory in the region, after a move of only 0.25 percentage points of key interest rates by the central bank this week. However, the main means of intervention becomes the Lombard rate, amid a liquidity deficit in the banking system.

The annual inflation rate reached 7.9% in October, from 6.3% in September, while the market estimated an advance of 7.1%. The big negative surprise came, again, from the steep rise in the price of energy – this time of natural gas, which has risen by more than a fifth in a month and by 46% compared to last year – but food has also risen. more expensive than expected (1.1% compared to September).

And the core inflation rate jumped by 0.4 pp compared to September and reached 4% per year. This rate is the most important for monetary policy, excluding from its calculation volatile, managed and energy prices, which the central bank considers can influence too little by the cost of money. It should be noted that this rate is also outside the NBR target of maximum 3.5% for the consumer price index.

READ ALSO INFOGRAPHICS The medical field has surpassed IT&C as a share among the tenants of office space in Bucharest. Before the pandemic, IT companies were a detached leader

“The data for October confirm that past (but there will be more) increases in energy prices have been passed on to the economy,” said Valentin Tataru, chief economist at ING Romania.

On Tuesday, however, the NBR chose to raise the key interest rate by only 0.25 percentage points to 1.75%, although the market expected an increase of 0.5 pp, especially after the recent aggressive movements of central banks in the region, which are facing and they with a high inflation, even if not at the level of the one in Romania.

“Romania has by far the most negative real interest rate in Central and Eastern Europe. At the same time, Romania also has the highest current account deficit as a share in the gross domestic product of the region “, notes Ciprian Dascălu, chief economist at BCR. 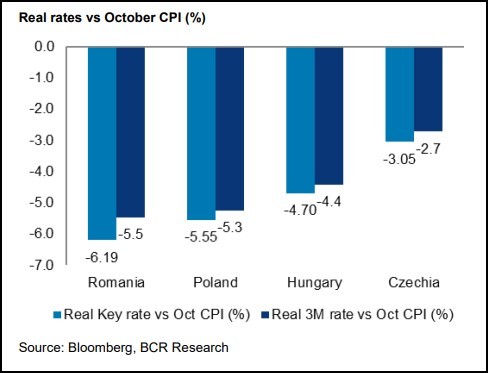 The NBR seems to have changed its preferred instrument for intervention in the Lombard rate by this week’s decision. Thus, by increasing the symmetric corridor around the key rate from 0.5 pp to 0.75 pp, the interest rate of the deposit facility remained at 0.5%, while that of the credit facility increased to 2.5%.

There is a liquidity deficit, as shown by the NBR, which did not disappear even after the banks received over 9.3 billion lei at the end of October – the system passed a deficit of 658 million lei from a surplus of 4.2 billion lei in September. Last month, the NBR lent banks an average of 1.9 billion lei a day through Lombard, the largest amount in the last year and did not give significant amounts through repo. Interbank rates have already risen in October and the first third of November. 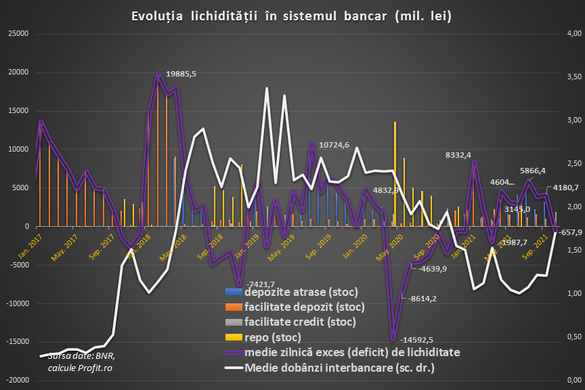 “The credit facility will most likely become the main operational instrument under strict liquidity control designed to support strict exchange rate control, combined with ongoing exchange rate interventions. It must be taken into account that the effect of the inflation rate is significantly higher in Romania than in the rest of the Central and Eastern European countries ”, believes Ciprian Dascălu.

Interventions to support the leu lead to a decrease in liquidity in the market. Less liquidity means more expensive credit, as long as it can only be obtained through Lombard. This strategy to increase the credit facility rate would be applied at the next meeting, in January, when BCR estimates that the key rate will be increased by another 0.25 pp, but also the spread of permanent facilities will increase to 1 pp.

The NBR strategy can work, however, as long as it remains a net creditor of the banking system, warns Tataru. “If the Ministry of Finance starts spending more money at the end of the year, as we expect it to do, then liquidity conditions could improve significantly, which would make the key rate relevant again.”

Finance is an important factor in the evolution of liquidity. The money is kept by the Treasury in a separate account and reaches the banking sector only when payments are made – salaries, pensions, bills – and withdrawn through taxes. The NBR uses the key rate both for repo operations, through which it provides liquidity, and for those for attracting deposits, through which it drains it, and from which it has held only one auction in the last two months.

Both BCR and ING see the key rate at 3% in the middle of next year, but the evolution will also depend on the other central banks in the region, given the fact that Romania must maintain a higher interest rate differential. Ionuț Dumitru, chief economist at Raiffeisen Bank, estimates that the NBR will bring the key interest rate to 3.5% by mid-2022, given that inflation will reach 8% either at the end of this year or in the spring of next year, depending on how the State interventions in energy contracts to compensate the factors, the reductions granted to vulnerable consumers, respectively the price caps will be taken into account in Statistics. WHO report: Europe out of the global trend of declining COVID-19... Behind the shot: bears in Brasov | news