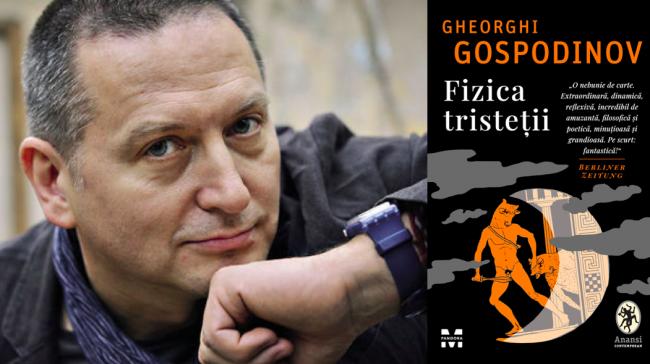 The beginning of November brings the novel to physical and online bookstores across the country The physics of sadness. This is the first translation in the collection Anansi. World Fiction from Editura Pandora M from his work Gheorghi Gospodinov, the most appreciated Bulgarian writer of the moment.

The novel The physics of sadness was awarded the Jan Michalski Prize for Literature, 2016 edition, and adapted into an animated film, directed by Theodore Ushev, screenplay awarded 14 international awards.

Using the Minotaur as a structuring metaphor, the narrator builds a maze of stories about his own family, jumping from one era to another and from one perspective to another, in an incredibly thorough and funny exploration of the Eastern European mentality. The physics of sadness is a book based on the obsession for archives, collections, museums and time capsules, about the traces left by time lost in texts, images and objects. In Gospodinov’s frame story, the Minotaur is the victim: unable to choose his own form of existence, he is the well-kept secret of cellars, archives and basements. Gheorghi Gospodinov proves to be, in this novel, a worthy descendant of Borges.

“A book madness. Extraordinary, dynamic, reflective, incredibly funny, philosophical and poetic, meticulous and grandiose. In short: fantastic! ”, Wrote the critics from the Berliner Zeitung at the publication of the German edition of the book. The book was also successful across the ocean, being mentioned in numerous reviews. “A lively evocation of communist-dominated Central Europe, a space in which the narrator, his family and their entire community lived underground, both literally and metaphorically,” wrote critics of The Literary Review.

Asked how he places his own novel in the context of recent past narratives, the author confessed that he believes in the fictionalization of personal stories: Once, an editor from one of the largest German publishing houses told me that my novels are great, but too Eastern European. This is probably true. I hope though The physics of sadness it is a little different and can give the reader a different maze. I think that, beyond this territorial division, we all come from one common country: the country of childhood. The physics of sadness is a novel about the empathy I had as a child and later lost. A book about the Minotaur as an abandoned child. About the personal history of the twentieth century. I am convinced that the personal story is more important than the history of the world. Or they are the same. This is the real context of the novel, I hope.

Provoked to imagine the ideal event for the launch of the book in Romania, Gheorghi Gospodinov told us that he would surround himself with the Romanian writers he knows and would turn the event into an attempt to bring together Romanian and Bulgarian readers:

There are so many Romanian writers I know and like. One week ago I was a finalist with Ana Blandiana at the European Witch Award. I like to read Mircea Cărtărescu, Dan Lungu, Filip Florian, Lucian Dan Teodorovici, Nora Iuga, Florin Lăzărescu and many others, dear Romanian writers with whom I know myself and with whom I took part in many common events. Cioran is one of my favorite thinkers. I went to the big festivals in Iasi and Bucharest years ago. That being the case, I think the perfect event would be a public reading at night on the Danube, a literary event with music, small orchestra (not like on the Titanic). And so to have in public people from both banks of the Danube – Romanians and Bulgarians. You know that we only have two bridges between Romania and Bulgaria. Don’t you think it’s weird enough?

Gheorghi Gospodinov (b. 1968) is the most translated and appreciated Bulgarian writer of the moment. His debut novel, A Natural Novel (published in Romanian by Cartier Publishing House), has been translated into over 20 languages. He has published poetry, prose, essays, plays and screenplays. He regularly writes articles for the Bulgarian daily Dnevnik and Deutsche Welle. He currently lives in Sofia.

The novel The physics of sadness appears in the Bulgarian translation of Catalina Puiu.

The government’s disinterest also killed the incoming Romanian tourism / For...