Talks are set to continue between the UK and the EU as it was warned the two sides were still far apart on issues surrounding the Northern Ireland Protocol.

UK officials described as “constructive” the first round of talks in Brussels this week, which came after the EU proposed new measures earlier this month.

It is understood that while there was common ground in some areas, there were still substantial gaps on what were seen as fundamental issues mainly surrounding governance.

Sources close to the negotiations said “real progress” must be made soon and a process of “endless negotiation” must be avoided. But reports of Christmas crackers being delayed by the Protocol was “yet another practical example” of the disruption caused by the agreement.

A team from the European Commission is set to travel to London on Tuesday for several days of intensive discussions.

Brexit minister David Frost (above) and EU Commission Vice President Maroš Šefčovič (below) are then due to meet in person in Westminster for talks at the end of the week.

The two leaders will take stock and assess progress so far.

A UK government source said: “The talks this week were constructive and we’ve heard some things from the EU that we can work with – but the reality is that we are still far apart on the big issues, especially governance.

“There’s been plenty of speculation about governance this week but our position remains unchanged: the role of the European Court of Justice (ECJ) in resolving disputes between the UK and EU must end.

“We need to see real progress soon rather than get stuck in a process of endless negotiation because the issues on the ground in Northern Ireland haven’t gone away.

“Whether we’re able to establish that momentum soon will help us determine if we can bridge the gap or if we need to use Article 16 to safeguard the Belfast (Good Friday) Agreement”.

The Protocol, which was agreed by the EU and UK to maintain a free-flowing land border on the island of Ireland, has created a series of economic barriers on the movement of goods from Great Britain to Northern Ireland.

Measures proposed by the EU would see an 80% reduction in checks envisaged for retail agri-food products arriving in Northern Ireland from Great Britain. 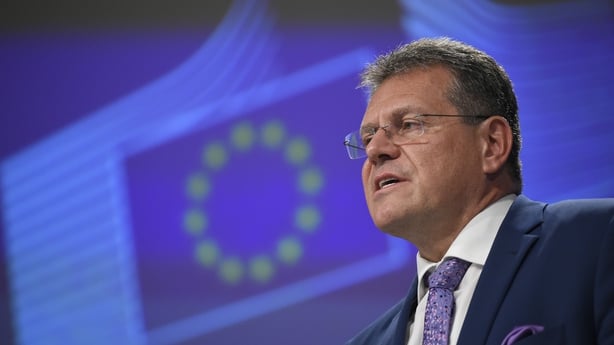 The proposed changes also remove the prospect of certain British produce being banned from export to the region.

And more products and companies would be exempt from customs tariffs as a result of expanding trusted trader arrangements and a concept that differentiates between goods destined for Northern Ireland and those “at risk” of onward transportation into the Irish Republic.

The EU has also offered to legislate to ensure no disruption to the supply line of medicines from Great Britain to Northern Ireland.

However, the measures contained in four separate papers published by the bloc do not offer any concession on a key UK government demand, the removal of the oversight role for the ECJ.

Mr Frost has made clear the removal of the court’s oversight function in policing the Protocol is a red line for the British government if a compromise deal is to be struck.

Under the terms of the Protocol, which was agreed by the UK and EU as part of the 2020 Withdrawal Agreement, the ECJ would be the final arbitrator in any future trade dispute between the two parties on the operation of the protocol.

The UK now wants to remove that provision and replace it with an independent arbitration process. The European Commission has insisted it will not move on the ECJ issue.

Reporters: US military blocking access to troops in Europe

Competition for the redevelopment of the Council Square in Brașov

How Conflicting Guidance on Travel During the Pandemic Shows Little Progress