About 20 years ago I read a treatise titled Along the Enchanted Path: A Story of Love and Life in Romania, in which British author William Blacker described falling in love with a Roma woman who lived in Transylvania and the way they lived . Since then I have been fascinated by Romania and eager to visit it.

It took a while, but two years ago my husband Barry and I visited four Transylvanian cities. All of them were walkable, historically and surprisingly unvisited, but our favorite was Brasov, a city of around 250,000 people, with a pedestrian zone in the old town and sidewalk cafes in many streets. It offers charms for everyone from history buffs to architecture fans, nature lovers and people watchers. What appealed to us wasn’t just the whole green space – more than any other city I’ve ever visited – but its very own, centrally located mountain.

We flew from Munich to Sibiu in Transylvania and from there took the train to Brasov, but next year it will be easier because an international airport is being built in Brasov. The first commercial flights are scheduled to take place in June 2021.

Pro tip: Don’t fly to Bucharest, Romania’s capital, unless you really want to see it as the train journey to Brasov is much longer and Romania’s outdated train system isn’t its biggest asset.

Whatever you choose, here are seven reasons to visit Brasov:

You can’t miss Mount Tampa – just go to the huge, glowing Brasov sign (a nod to Los Angeles Hollywood sign) on the hillside, which is in a nature reserve. The ascent takes about an hour and you have the choice between several routes with different degrees of difficulty. You can also take the cable car (tickets cost around $ 5 round-trip) to the top, an elevation gain of 300 meters. From the top cable car station, walk 10 minutes on the way past the Brasov sign to the rocky peak for the best views. After admiring the red-roofed city below, you can continue exploring at great heights.

And Tampa isn’t the only hill – there are other mountains north of the city. We met a delightful young couple (a third of our age!) Through couchsurfing.com. On a Sunday Katia and Emil invited us for a schnapps afternoon, and the next weekend we went hiking with the two of them and Katia’s mom and her friends. 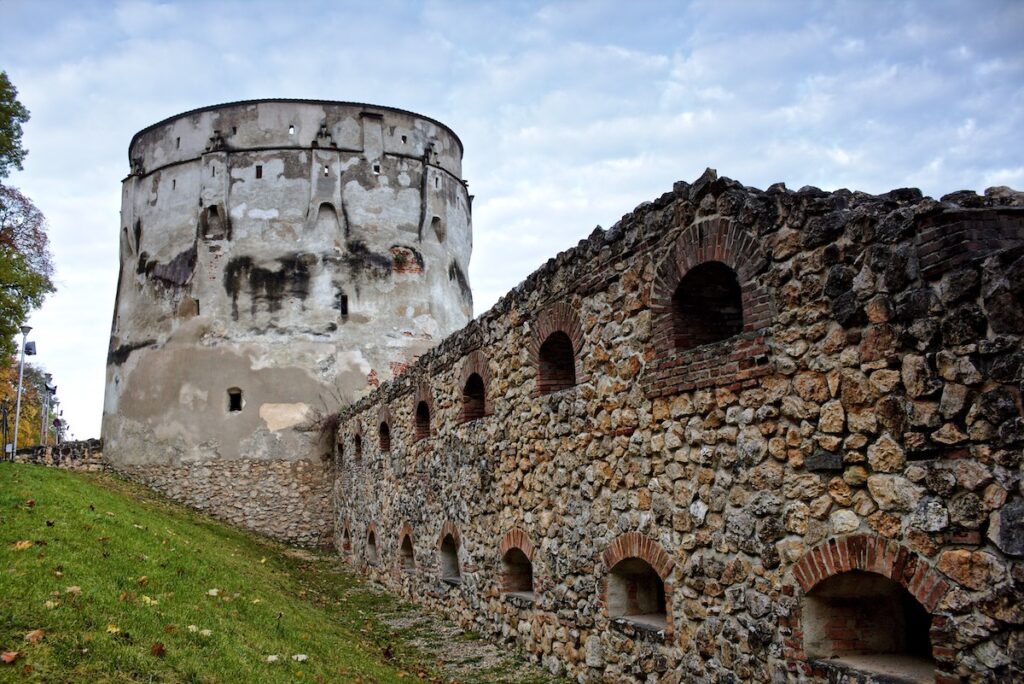 2. Pretend you’re back in the elegant 19th century

As you stroll along Brasov’s Tampa Promenade, the long tree-lined pedestrian mall at the base of Mount Tampa, you’ll see signs indicating that people loved walking there more than 200 years ago. Since I have always understood the Soviet era to be architecturally strict and sparse, I was surprised to see this beautifully preserved green space that the Romanians enjoyed during this period. You can also stroll along the walls of the old fortified complex of the medieval city, past the Drapers Bastion, Powder Store Towers and the Rope Maker’s Bastion.

We enjoyed a sumptuous meal at the elegant Sub Tampa restaurant just above the boardwalk with a view of trees and the Black Church in the distance. 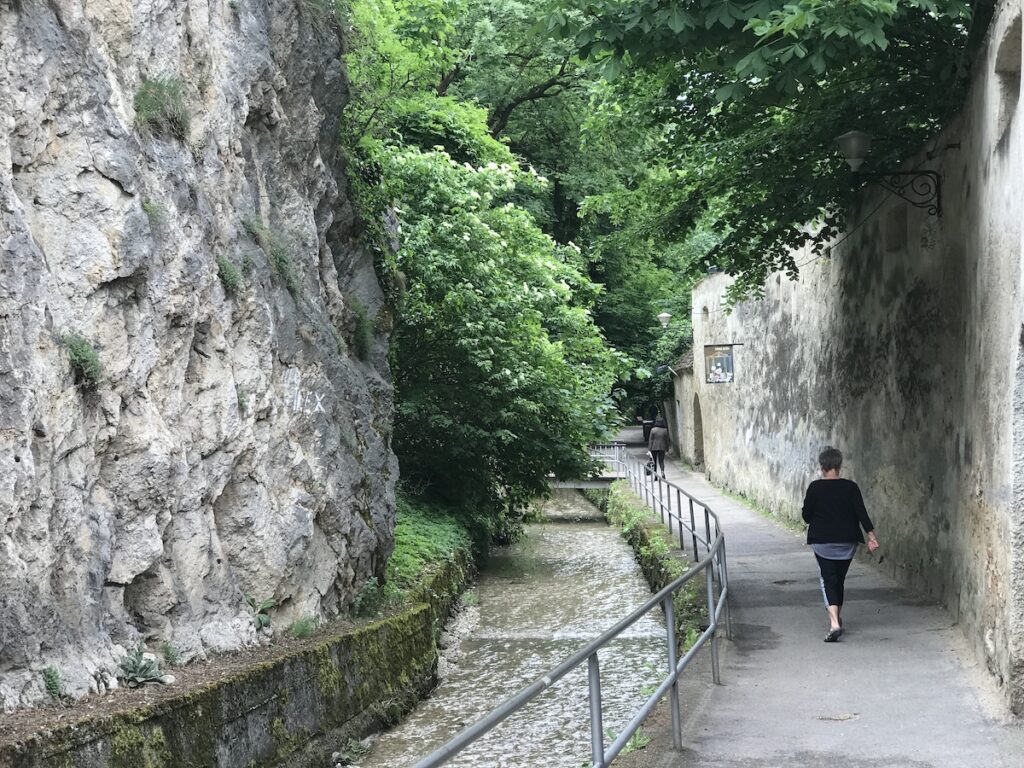 3. Brasov’s only body of water is small but fine

A narrow canal flows behind a section of the city walls, a lovely spot to take a stroll on a winding pedestrian path. I went every day! In the middle of the path is the Graft Bastion, which houses the city museum, and steep stairs lead to the White Tower. Below is a sign for the Black Tower (which is actually white, but is called black because it was burned by lightning in the 16th century). Follow the walls when you turn left and look out for the Katharinentor and shortly after the Schei-Tor. 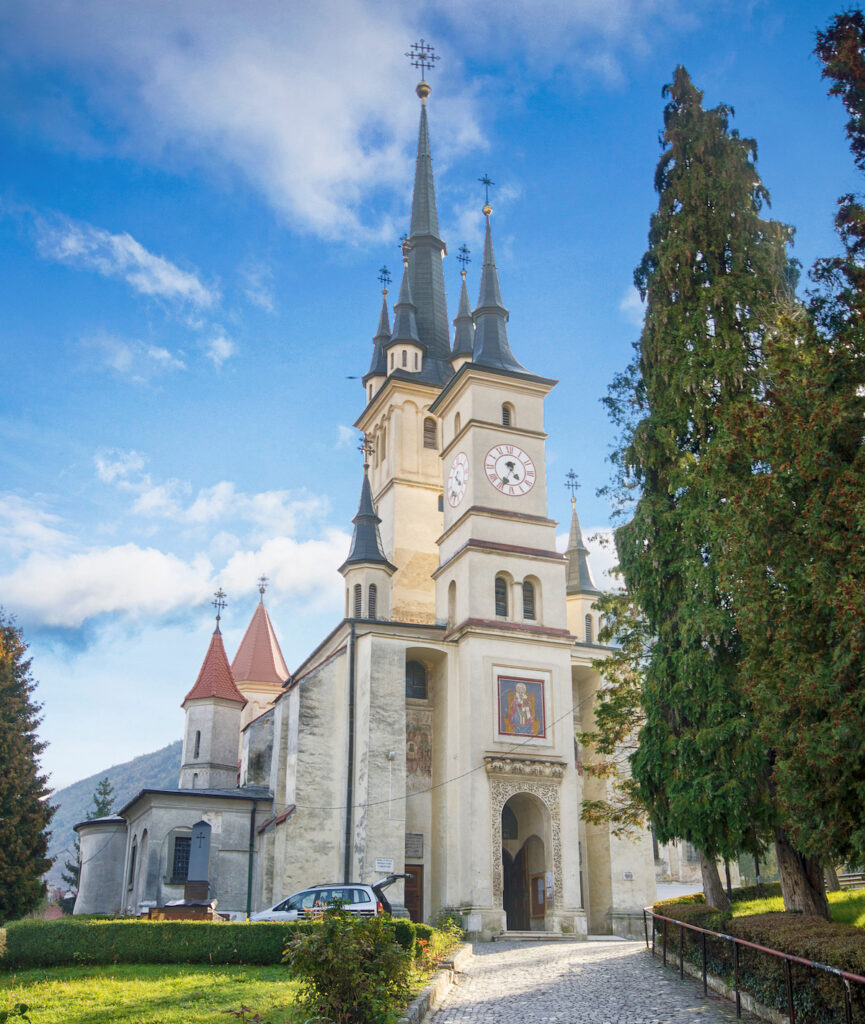 4. Enjoy being an urban stroller, a stroll through the city streets

Not only the old town, but also other parts of Brasov are historical and bizarre. In the Schei district, for example, Romanians had to live during the Saxon rule of Brasov from the 13th to 17th centuries. They were forbidden from owning land within the city wall and had to pay a toll at the Schei Gate in order to sell their products inside the citadel.

On the other side of the gate, walk up Strada Prundului, past the Jewish synagogue to the ornate Orthodox Church of St. Nicholas, a mix of Byzantine, Baroque, and Gothic styles. One afternoon I was sitting in church and watching light and shadow move along the wall and people come in. A man about 40 years old in a business suit entered the church, went to a small statue of Mary that was holding Jesus, and kissed it. I had never seen such an open, physical expression of faith in a grown man.

The narrow, winding streets beyond the church lead uphill against a hill. I followed the alleys up and down until I came to a level path above the town and dragged myself on until I came across a find – a tiny chapel with a red tile roof and arched windows. 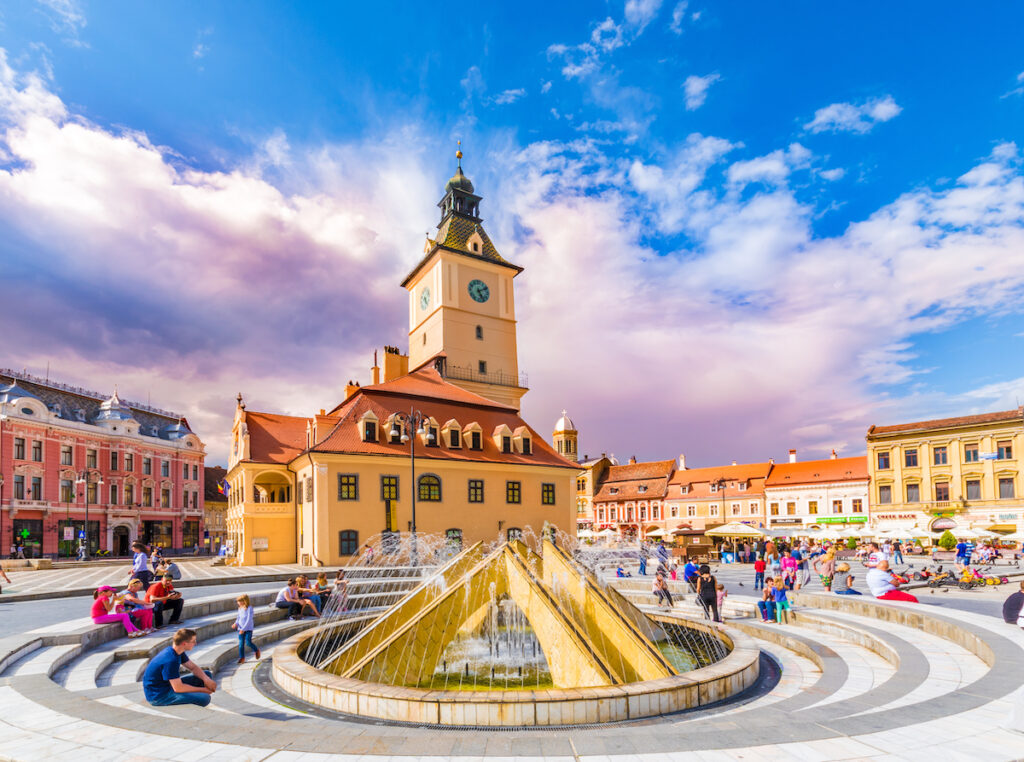 Brasov’s modern, hip and clean old town completely surprised us; We just didn’t expect that from a post-communist state. As we walked the streets we were struck by what we didn’t see – garbage, graffiti, homelessness, beggars or street dogs. Sometimes we felt like we were in cosmopolitan Barcelona or Milan, with the abundance of trendy fashion shops and street cafes – but without crowds of tourists and at prices that were more reminiscent of the 80s. For example, a cup of cappuccino costs 5 lei, about $ 1.50. Our pizza for two in the main square was 24 lei, or $ 6. 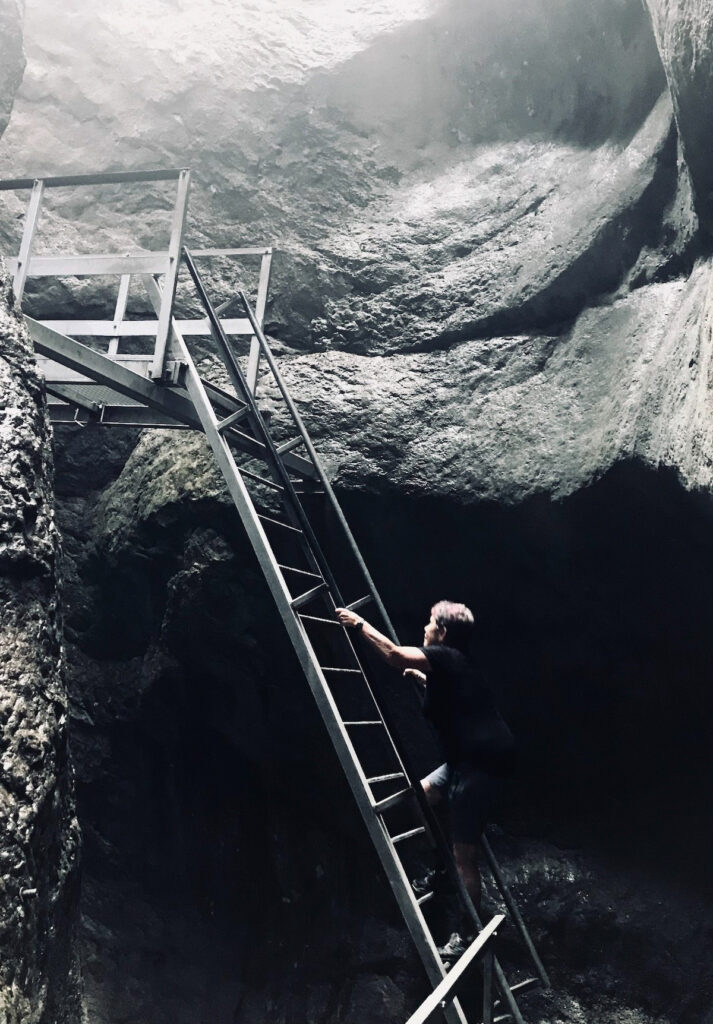 6. Get an endorphin high while climbing Seven Ladders Canyon

Thousands of years ago, Jurassic limestone broke and collapsed, creating a narrow gorge with waterfalls located on the outskirts of Brasov. From the parking lot, walk about 45 minutes to Seven Ladders Canyon, which you cross via a series of paths, stairs, bridges and vertical ladders between 2 and 4 meters. It takes about 30 minutes to get to the top. The canyon isn’t a difficult climb, but it may not be the right activity for those who are afraid of heights. I’m not afraid of heights, but the ladders were so steep that I screeched with excitement and nervousness and gratefully wore sturdy shoes! At the end, you’ll make a loop and return through the forest to your starting point. The price of admission was 10 lei or $ 2.50. 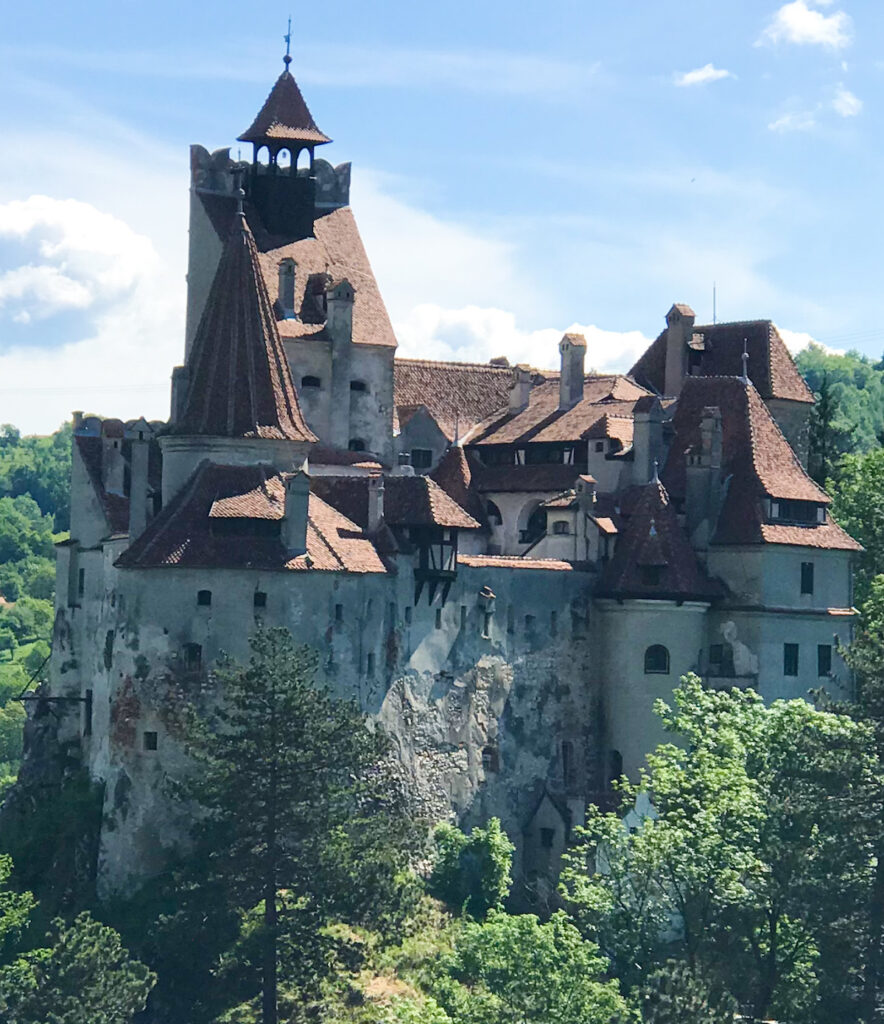 7. Check out the strange lock that Dracula is based on

Bran Castle, a national monument about 15 miles by bus from Brasov, isn’t actually Dracula’s home – but that doesn’t stop the hordes of tourists who visit it. According to the official brochure, the 14th-century structure with its red tile roof and many irregularly shaped turrets has little in common with Prince Vlad, the model for Bram Stoker’s 1897 novel Dracula. Unlike Count Dracula, Vlad was a real person, popularly known as “the Impaler” for slowly and painfully killing his enemies while they were dangling from a sharp stake. In Romania he is a folk hero and is considered a master of psychological warfare.

On the way visit Rasnov Citadel on a hill near Brasov with great views. It was built by locals in the 1200s to defend themselves against attacks from intruders. You can either take the funicular or walk up the hill.

Our travel guides said that we only needed two days in Brasov – one day for the city itself and one for the surrounding area. Are you kidding? We were there for 10 whole days, then we went on to Sighisoara and Medias, two other Transylvanian cities. But we weren’t done with Brasov! We returned for a second serving. And now, two years later, I’m ready for my third. For the first time since 1980, the destination Romania is missing...