The floods that destroyed everything in its path and left people without anything could be “met” in other conditions. It was known since 2018 which buildings were at risk. In this regard, many steps could have been taken if the local authorities had been involved.

In Switzerland, only those who have completed insurance for the planned construction have the right to build, a mechanism unlikely to be able to be applied in Romania as well, especially in areas recently devastated by floods. People built near the waters because they were allowed to, but recently the reverse of the medal was also seen: the waters destroyed everything in their path. And Romania is neither Switzerland nor Italy, with an exemplary civil protection system, as a DCNews reader draws our attention.

Referring to the Bran – Moieciu area, also affected by the floods, the reader wrote to us: “If you asked me” Why did Bran and Moieciu get flooded again? “, My answer would be” Out of ignorance ”. Brașov County Council, Brașov Prefecture, ISU Brașov and ATUs had from 2018/2019 analyzes on various types of natural risks, including floods (Bran, from September 2018, Moieciu from November 2018) as well as buildings that are in danger of be exposed to floods ”.

Who is responsible that no action was taken in time. How responsibilities are divided from central to local level

In this context, DCNews sent several requests, passed by officials from one to another, according to the answers received. Finally, ISU Brașov answered us, the one who, in the end, saves, but has no administrative role to sustainably prevent such critical situations, apart from the warnings sent.

First of all, in the reply received, ISU informed us that the authority responsible for the main role is the Ministry of Environment. We also find out that in 2019, so after the above-mentioned analysis, a regulation on emergency management was drawn up. For the floods, the responsibility returned to ISU “Țara Bârsei”, but also to some organizations with responsibilities in the field, which must notify, warn, alarm, search and save. Otherwise, RO-Alert messages and SMS were sent to local authorities. 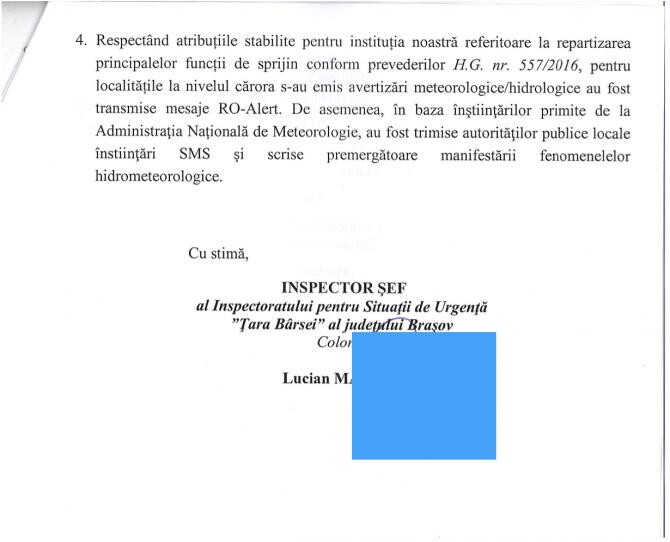 The local authorities did not answer what they did in a preventive sense, following the 2018 analysis. Maybe they did nothing. Romania has among the lowest prices in the world on the... “After the first quarter of the year, sales felt stagnant, tending...