The 1940s were complicated in Oradea and Bihor, and the regime changes and the great world conflagration left multiple traces that were perpetuated long after.

The autumn of 1944 was one of the hardest, and by appealing to specialized works and memoirs, Bihor shows you what happened in the cities at that time, what were the consequences and the mood of the population.

For four years, Bihor County was torn in two. By the Vienna Dictate, the northern part, including Oradea, was ceded to Hungary by Horthy. In the summer, the city was still marked by the deportation of the Jewish population and a June 2 bombing, with more than 100 victims and hundreds of homes destroyed and damaged, and on August 30 another attack on the airport took place.

World War II was in full swing, with two main fighting forces: Nazi Germany and its allies, Italy and Hungary, and the United States, along with England, the Soviet Union, and many others. On August 23, 1944, the armies of Eastern Europe repositioned themselves after Romania left the alliance with Germany and joined the Anglo-American group, in order to regain Northern Transylvania, so the mobilization took place on the Romanian-Hungarian border.

Budapest declared the area a war and any hostile demonstrations against the Horthyst regime were to be punished. Things got more complicated around Oradea, with Hungarian and German troops launching attacks from 5 to 17 September in the directions of Salonta and Beiuş and reaching the Fânaţe – Sârbeşti – Şuştiu – Briheni line, close to the current border between Bihor and Arad.

The attack failed, being stopped by the 3rd Mountain Hunters Division commanded by General Leonard Mociulschi (photo). In a study from the Annals of the University of Oradea, the historian Antonio Faur shows that in less than 10 days the Division “closed the gates” to Apuseni through Băiţa and Vaşcău, being able to prepare the offensive to the north. On September 21, Soviet troops also arrived, launching several Katiuşa rocket launchers in the area of ​​Lunca commune, near Ştei, then occupying Beiuş.

The liberation of the northern part of Bihor from Horthysm was triggered the next day, on the Beiuş-Oradea direction by the 3rd Division, together with the 337th and 78th Soviet divisions. The Tudor Vladimirescu Division, 2nd Regiment commanded by lt. col. Ion Buzoianu, who moved from Târgu Mureş to Beiuş. The “indescribable momentum” that the soldiers had – according to the memoirs of the time – surprised the enemies, who fled disorganized, committing devastation and crimes.

In Crisia magazine, Ioan Marinescu showed that until the end of September the Romanian-Soviet troops occupied Ginta, Petid, Tinca, Gepiş, Berechiu, Salonta, Leş, surrounding Oradea from Sântandrei to Rontău. For two weeks, two large rounds of fighting took place around the city with Hungarian and German infantry, artillery, tanks and aircraft, with offensives and counter-offensives, especially towards Nojorid, Leş and Salonta.

The “Battle for Oradea” ended on October 12, in the evening, with the entry of Romanian and Soviet armies into the city. The units of the Tudor Vladimirescu Division entered from Nojorid, and those of the 3rd Division from Sântandrei, while the Soviets came from Sânmartin.

Offensive to the northwest

The soldiers were received by the people of Oradea in the center of the city with cheers (photo), just like in April 1919, when the Romanian Army first entered Oradea. But the moment was short, because the mission would continue. 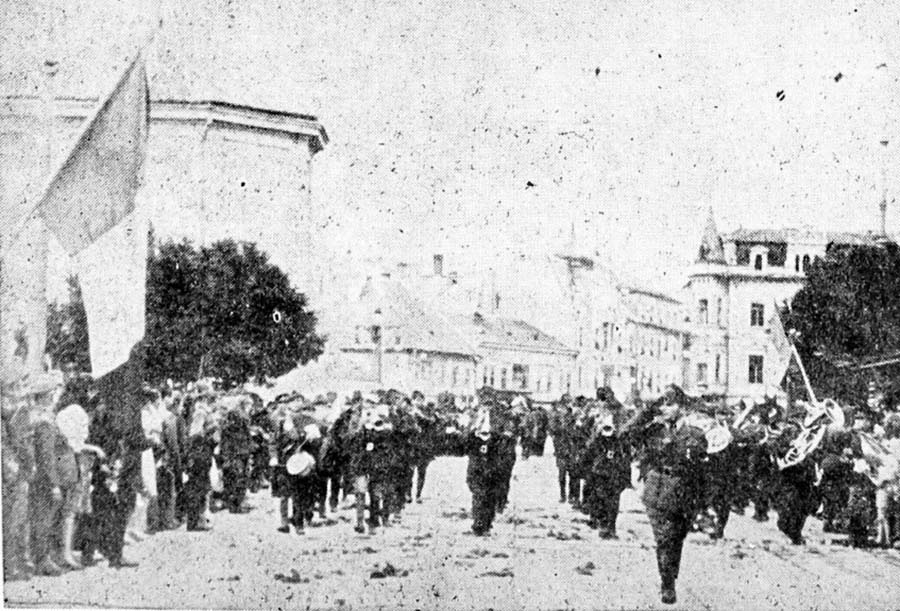 On October 13, the 3rd Mountain Hunters Division changed direction, advancing on Sântandrei and Berekböszörmény (immediately after Cheresig) flanked by the Tudor Vladimirescu Division and the 78th Soviet Infantry Division. The actions continued to the north, where they fought the 2nd Hunting Division of the Romanian Army and the 180th Soviet Infantry and 93rd Guards Divisions, against the 4th, 9th and 12th Hungarian Infantry Divisions and the 23rd and 76th Divisions of the German 6th Army.

Then followed the advance to Săcueni, Sălacea and Valea lui Mihai, as well as on the current territory of Hungary, in the Debrecen area. On October 20, 1944, Marghita was occupied by the 93rd Soviet Guard Division, which then continued its offensive towards Nyíracsád.

The Soviets also caused iniquities, according to historian Antonio Faur. In most villages, they committed abuses and thefts, devastating the households where they were housed and provoking revolt among the locals. 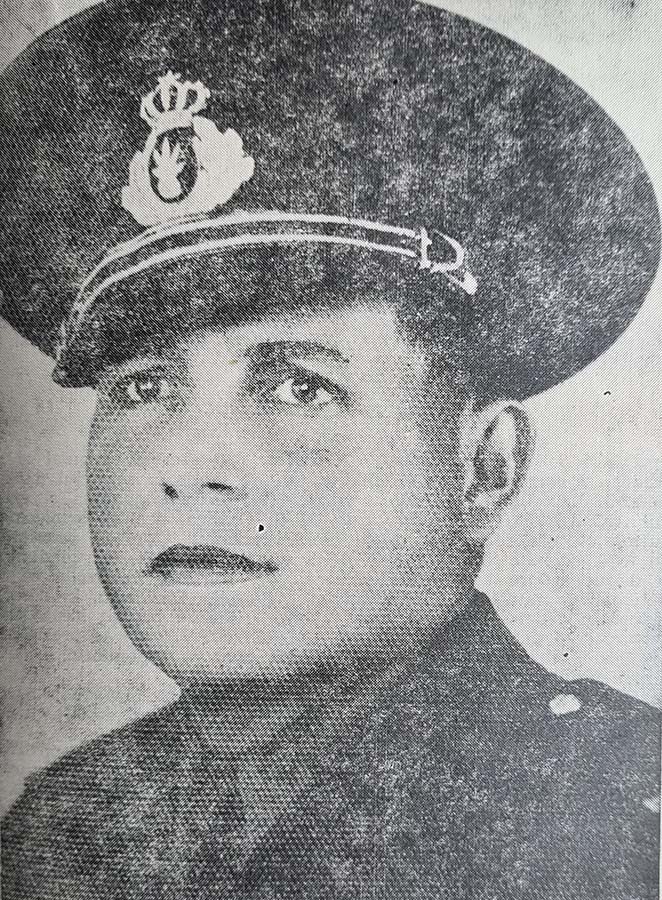 The proximity of the Romanian and Soviet armies created tensions in Oradea. Fearing the attack, local authorities, along with László Gyapai, who had been mayor since March, evacuated the town hall on September 25, taking refuge in the city. From then until October 2, during the Hungarian-German offensive against Beiuş, when the officials resumed their activity, the city no longer had a mayor, led by the Secretary General of the City Hall, László Borbély.

The withdrawal of the Hungarian military and administrative authorities left a power vacuum in the city. In order to prevent anarchic actions, three citizens of Oradea – Silviu Andrei (photo), former officer, Nicolae Rajkovič (barber) and Papp Tibor (clerk), organized a civil guard. They were part of a group of about 40 citizens who armed themselves from police depots to guard the city center, especially public institutions and former Jewish shops.

Returning to the city, the Horthy authorities arrested the three, on charges of organizing armed troops of partisans to fight behind the front. All three were tortured, tried briefly and sentenced to death in just two days. Papp Tibor was, however, pardoned and even re-employed in the City Hall, the others being shot and buried in the ditch of the Citadel on October 9.

The battle for bridges

Against the background of troop movements and air raids, the mood of the people of Oradea was dominated by fear and confusion. At the beginning of September, the City Hall established the obligation of public works for the civilian population, for organizing the defense against the Romanian and Soviet armies.

An American bombing on September 6 seriously affected the city, especially near the railways, the Oncea, CFR and Velence neighborhoods. According to witnesses, in the chaos generated by the advance of the Romanian Army and the vacuum of local power, in order to gain some time, the enemies wanted to blow up all six bridges in the city. The old Decebal bridge was saved thanks to Alexandru Czövek, E. Sipos and an unidentified shoemaker, who crossed the Cris swim and cut the wick of the explosive charge.

The day before the arrival of the Romanian-Soviet forces, members of the Ragged Guard (Horthy paramilitary organization) asked the inhabitants to decorate the houses and windows with a portrait of Horthy and flowers. They patrolled armed, requisitioned cars and carriages, and indulged in drunkenness.

In the center, the bridge over the Cris had also been initially saved with the help of veterans from Oradea, including the printer Béres Sándor. On October 12, however, a few hours before the arrival of the Romanian Army, a horthyst lieutenant and several comrades managed to mine and blow him up, executing several locals who asked them to spare him. At the same time, the City Hall building was devastated and destroyed (photo). 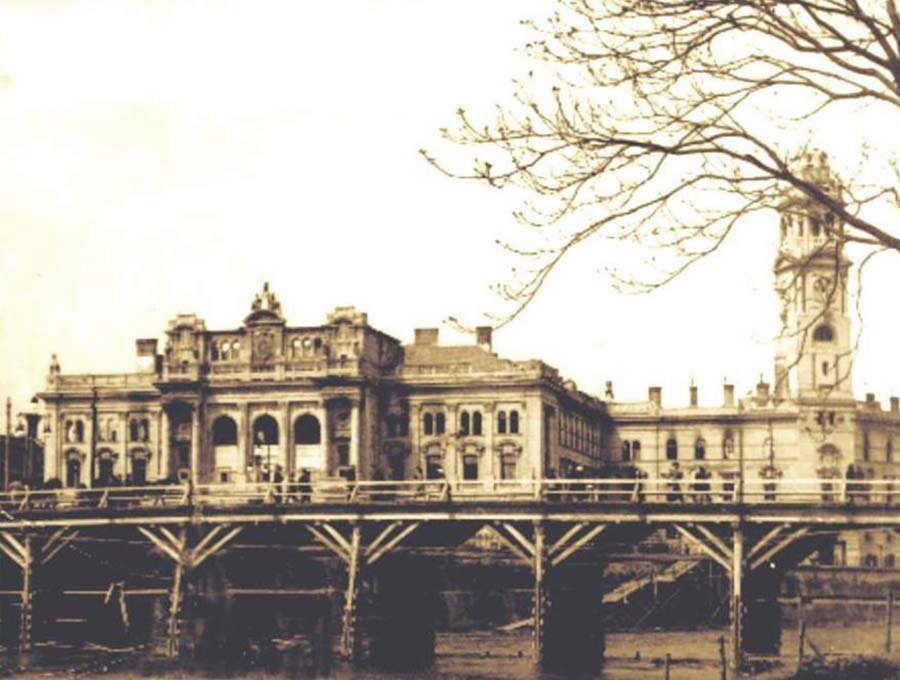 A sad episode in the past of the city and the county, the autumn of 1944 was evoked for a long time in a scientific and popular setting, for decades the people of Oradea had unpleasant memories from the chaos weeks of the end of the war. Even though the witnesses of the time have disappeared, the facts remain part of the local history, which is passed on.

RED DAWN
The beginning of communization

The occupation of Oradea and Bihor by the Soviets foreshadowed the establishment, here too, of the communist regime. From October 25, 1944, when Northern Transylvania was completely liberated from Horthysm, and until mid-March 1945, the city was controlled, like all of Transylvania, by the Soviet military administration, the commander of Oradea being Major Maskov. Soviet commands appeared in all localities, subordinated to the Soviet Control Commission in the county, in Oradea they blocked the reinstatement of the Romanian administration.

After the appointment of the pro-communist government led by Dr. Petru Groza on March 6, 1945, the USSR accepted the return of Northern Transylvania to Romania, but the Soviet occupation remained, hastening the communization process. Monuments dedicated to the Red Army began to appear in public squares, such as in Union Square (photo), renamed Malinovski. On the facade of the City Hall and other public buildings were mounted portraits of Stalin and Lenin, five-pointed stars, Soviet flags with sickles and hammers, American and British flags (these, however, were soon brought down). Purges began in all institutions, with anti-communist officials being eliminated and replaced with people loyal to the new regime. 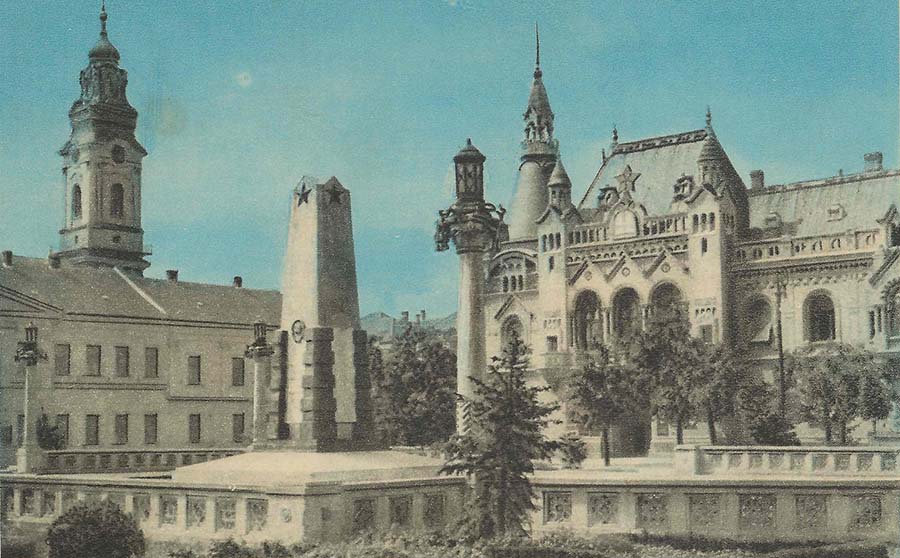 In the heat of the second, artillery launches massive fires /...